Dealing with Your ‘Inner-Critic’ 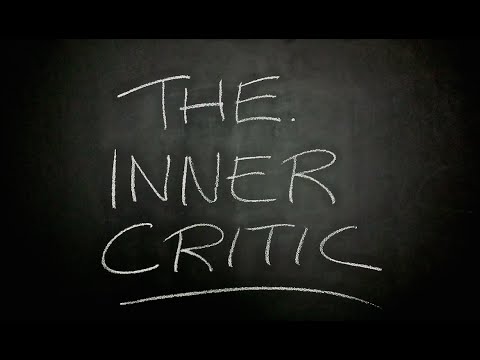 All of us engage in ‘self-talk’ – the ability to talk to ourselves in our minds as we process, or comment on the happenings around us. The likely function of this ‘self-talk’ is to help motivate us and keep us on track. It’s great when it works – but it can painful and even destructive when it doesn’t.

Take a moment and reflect on something: What tone and words do you use when talking to yourself – do you use a harsh, critical or self-sabotaging voice? Or are you warm, kind, friendly, and helpful?

All of us have at times had an inner voice that has echoed disappointment when things have not worked out the way we would have liked. It seems a common reaction that can help motivate ourselves to ‘dust ourselves off’ and try again. However, if your self-talk is harsh, mean, or punishing – If your inner dialogue is consists of shaming, disparaging, judgmental critical or hurtful commentary, then this is a signal that your ‘inner-critic’ has taken over!

People who engage in self-criticism are at a high risk of stress, anxiety, and depression and there are good reasons for this. If you are interested, I encourage you to also read about the Physiology of Self-Criticism and the Fears, Blocks, and Resistances people can develop around extending warmth, care, and support to themselves.

The problem with having a harsh inner-critic is that it triggers our ‘threat system’, which signals to the brain that we are under attack. The brain responds by releasing cortisol and other hormones that trigger the fight-flight response. This is useful if we need to run from a lion, but not very helpful in terms of our inner-critic because we can’t actually run from ourselves! Yet, many people motivate themselves in this way – and it can cause much stress and heartache!

Why do we have an Inner-Critic?

We know from decades of research that children who grow up with very critical parents tend to internalize those voices and grow up to be very self-critical themselves. In fact, some people say that their inner critic even sounds like a critical parent or someone they knew from childhood.

Other people may have grown up with the complete absence of a safe, warm and soothing caregiver, and if this is the case it is very common for there to be fear, anger, pain or aversion associated with being kind to one’s self when in a time of need.

We also know that this development during the earliest years of an infant’s life is dependent on an infant’s ‘Attachment’ to their primary caregiver, and that this relationship (or lack thereof) influences a child’s ability to self-soothe and regulate their emotions throughout life. I have written extensively about how Attachment affects your brain’s development, your ability to regulate your emotions, and your relationship with yourself (and others), here.

Why do we engage in Self-Criticism?

There are several reasons for engaging in self-criticism. One is BECAUSE WE CARE – When we deeply care about an outcome, often we also fear failure. Thus, thinking about the mere possibility of something not going as we planned can trigger our brain’s threat system (e.g., the fear of failure) and can motivate us to take action.

Often, because the possibility of falling short of our ideal threatens our self-concept, to protect ourselves from the fear of failure our inner-critic may step in to motivate us. But, the inner-critic also triggers the threat system, which causes a cascade of stress hormones that can overwhelm and flood our body and our emotions. This can cause us distress, and can even get in the way of us taking effective action. This is akin to motivating ourselves with a baseball bat

E.g., People who struggle with perfectionism or who hold excessively high standards of themselves are constantly living with the impending threat of disappointing themselves. They often use harsh self-criticism to motivate themselves, which triggers their brain’s threat systems. This triggers a cascade of physiological activity and stress which can seem overwhelming. Because of this stress, they are at high risk of performing poorly or making a mistake which if happens then becomes a self-fulfilling prophecy. This in-turn justifies and fuels their harsh inner-critic for the next time – “See!? I told you that you were no good!”

Clearly, this is NOT helpful!

If we talked to friends like this – they would not remain our friends for long!

Self-Compassion: The Antidote to Self-Criticism

If our inner-critic is ultimately stress-inducing and destructive – what options do we have? We know from decades of research that learning to cultivate an approach of self-compassion is an extremely powerful antidote to the inner-critic. Although this may sound like an alien concept, thankfully, self-compassion simply requires practicing a set of skills that can be learned.

When we practice self-compassion, we are actually moving our sense of safety from the threat system to our own care-giving and attachment system. This awakens our own ability to ‘self-soothe’ which is actually more productive than being self-critical. Whereas over-relying upon the threat system as a source of motivation can make us stressed, anxious and depressed and generally inhibits a good emotional mindset to really accomplish anything, when we give ourselves compassion we feel safe, emotionally balanced, and loved. This puts us on the best footing to not only be happy, but to also grow and to reach our goals.

However, for many people these skills involved in Self-Compassion may seem unfamiliar. As mentioned earlier, for many people, the origins of their inner-critics reside in childhood experiences of shame, rejection, and parental hostility or unresponsiveness.  For many, often the mere suggestion of being kind to one’s self can trigger the inner-critic in the form of judgments and resistance via negative thoughts/emotions (which can trigger a threat system response!).

And, just like how the immensely beneficial concept and practice of ‘Mindfulness’ is greatly misunderstood by the general public, there are many misunderstandings about what self-compassion is. Therefore, you owe it to yourself to learn more about Self-Compassion.

If you are struggling with your harsh inner-critic or would like to learn how to apply the skills of self-compassion and kindness to your situation, let’s talk.

How Your Attachment Style Affects Your Emotion Regulation & Relationships

Our earliest attachments with parents and caregivers shape our abilities and expectations for relationships throughout life. Early attachment experiences impact on a child’s developing brain, and can result in protective behaviours and difficulties with emotion regulation that can continue into adulthood. Learn about attachment and how you can recover from the wounds of your past, here.

Toxic stress from ACEs can change the brain, effectively narrowing our Window of Tolerance and making us susceptible to chronic mental health and medical conditions. Effects of toxic stress can be passed on intergenerationally, but can also be significantly lessened by protective factors. Learn about ACEs and what you can do to help yourself, here.

Your Window of Tolerance